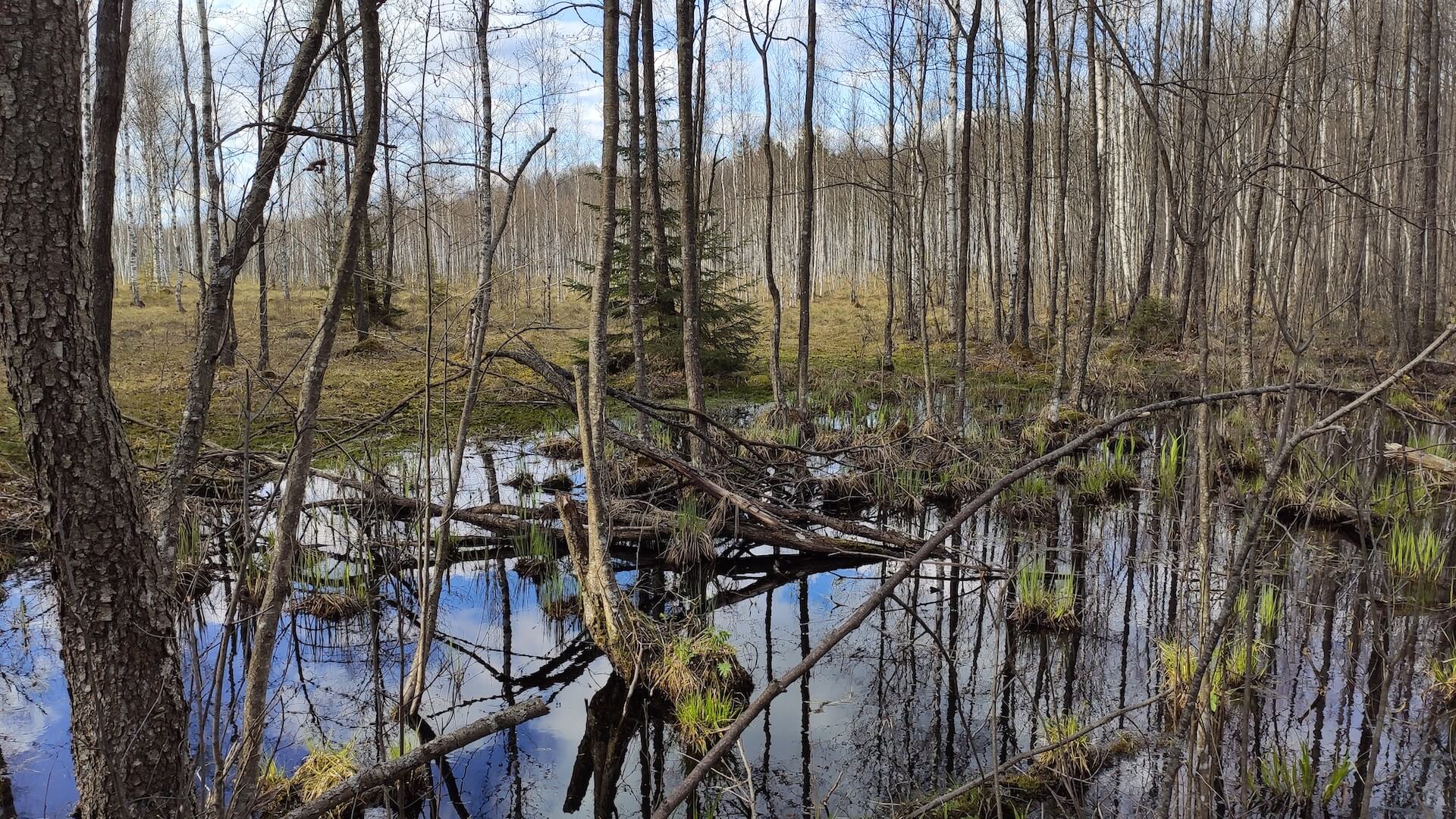 It’s the most interesting and exciting route in the Berezinsky reserve in my opinion. And the hardest one. Riding 70 km by not the best road is only for trained people. But the emotions you relive you will remember all the year and even more.

You can download this and my other routes in the MapsMe mobile app: Monument to the Victims of Fascism

In 1943 here were burned the locals of the nearest village Postrezhe. They didn't want to help the nazis beat partizans, so for that, they were punished

The old cemetery is about the XVI century. A big mound about 50 meters in diameter and 2 meters in height. On the mound, you can see a lot of big stones. On some of the stones stamped crosses.

Here, during some period, lived and worked scientists. They took different measurements and monitored biotopes. They lived in a railway wagon and moved between monitoring points via built wooden pathways. You can still see some of them. The stationary was closed in the middle of the 1990th.

When in 2009 happened a huge hurricane and tumbled down many trees, scientists decided to set up a small tower here to have the possibility of observing how the forest recovering. Since that time young trees have significantly grown and created a new biotope.

Since olden times and till the late 1970th here was located a big village Postrezhe. There were a shop, forestry, and other organizations. During WW2 the village was fully burned by nazis due to strong partisan activities in this district. After the war, the village recovered but was resettled for nature preserving purposes. While walking around this area, you will find a few observation houses, a well, a gazebo, remnants of a former life.

This ancient lake is placed inside of a bog. This is one of the greatest places ever, in my opinion. You will have to overcome about 800 meters of the bog to reach the lake, but it’s worth it. Don’t forget to wear rubber boots.
And enjoy cranberries on the way;)

An anti-partisan operation “Cottbus” was proceeded in May – June 1943 in the areas of Begoml, Lepel and Ushachy. During the operation, a number of partisan squads were surrounded by Germany troops in marshland near Postrezhe village. On the 19th June, the siege was breached here and many people were saved.

One of the biggest high marshes in Europe. It sprawls over an area estimated at 10.9 hectares. Our route crosses the bog via a scenic levee with a variety of small wooden bridges. And look around carefully, probably you will encounter someone…

Until 2019 here had been growing one of the biggest oaks in the reserve. It was about 300 years old. Unfortunately, it was fallen by the wind. But I have found a few old photos for you.

On the way, you could see a few glades that looked unusual comparing to the surrounded environment. Those are former homesteads. Here is a typical ex bowery. You can see a big glade, trenches and some remnants of life. The main dominant here is an old hunter’s tower.

The Great river is not so great as you can see;) However, the biggest one in kilometers around. And probably the wildest one in the reserve. The pathway going to the south leads to the Uvyazak area (my other route). We are continuing to the east.

Partisan squad “Leonovtsy” was based in this scenic place, during WW2 in 1942-1944. Now here lives a beaver. It builds its dam on a small river.

One more big ex village. Unfortunately, it’s hard to find some info about this place, but judging by the size of space open from the forest it was a village about 20 houses.

Some time ago it also was quite a big village with forestry and farms. Now here left only a few houses, but there are no permanent residents. So, do not be surprised if you see well-maintained houses but no people around.

A big nowadays Belarusian village with a big farm, shop, club, forestry and other organizations. Here you can refill your water bottles. The main sightseen here is a monument to soldiers of the village and victims of fascism. Further our path lies to village Staysk.

Today we have already been on the south shore of the swamp. Now you are on the north coast of this great high marsh. The landscape is bewitching, isn’t it? 😉

This river is a part of the Berezina water system that connects rivers Western Dvina and Dnepr. If you sail downstream you will reach the Black sea, if you sail upstream – the Baltic sea. 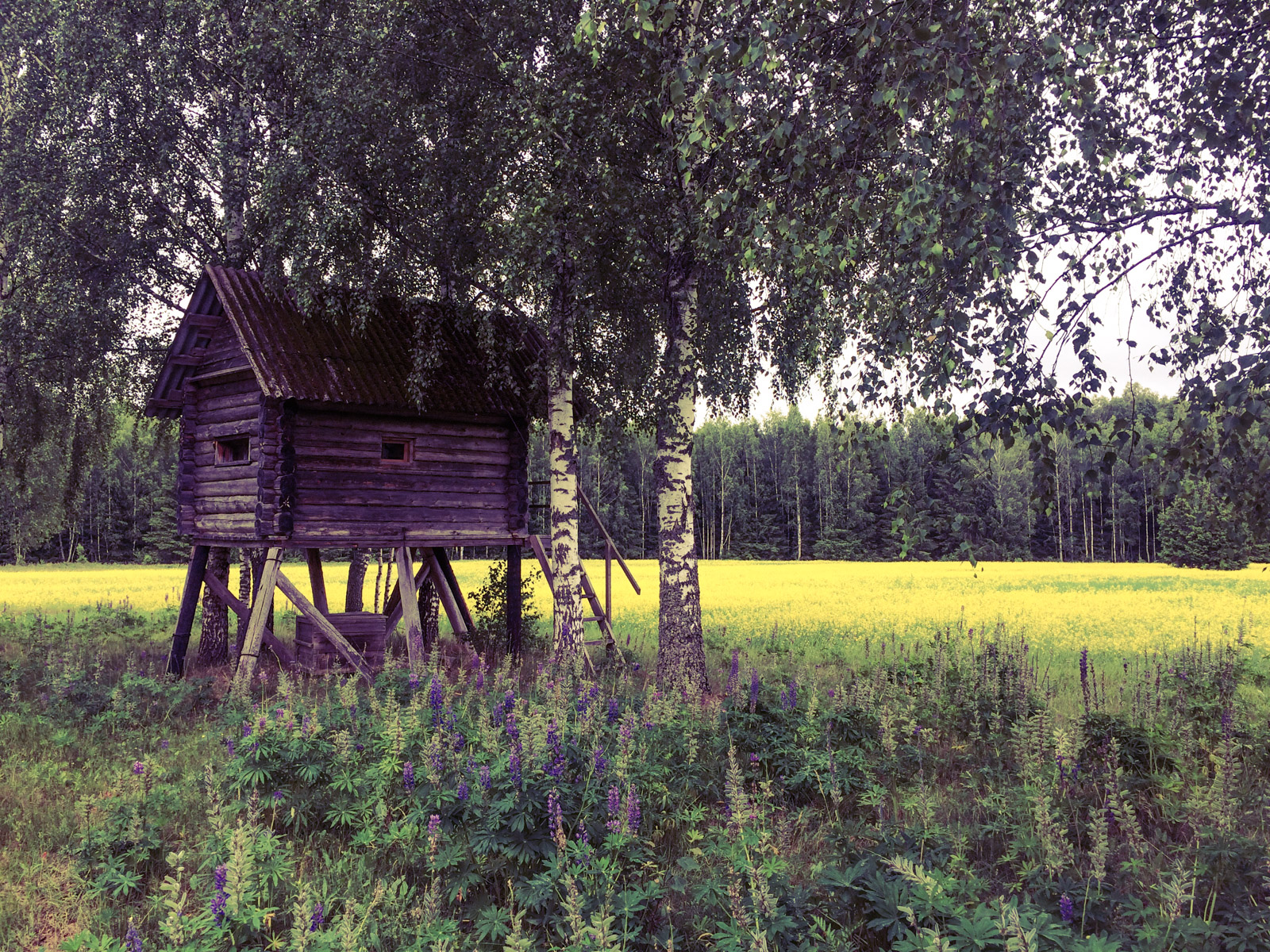 Get an offline track in your mobile 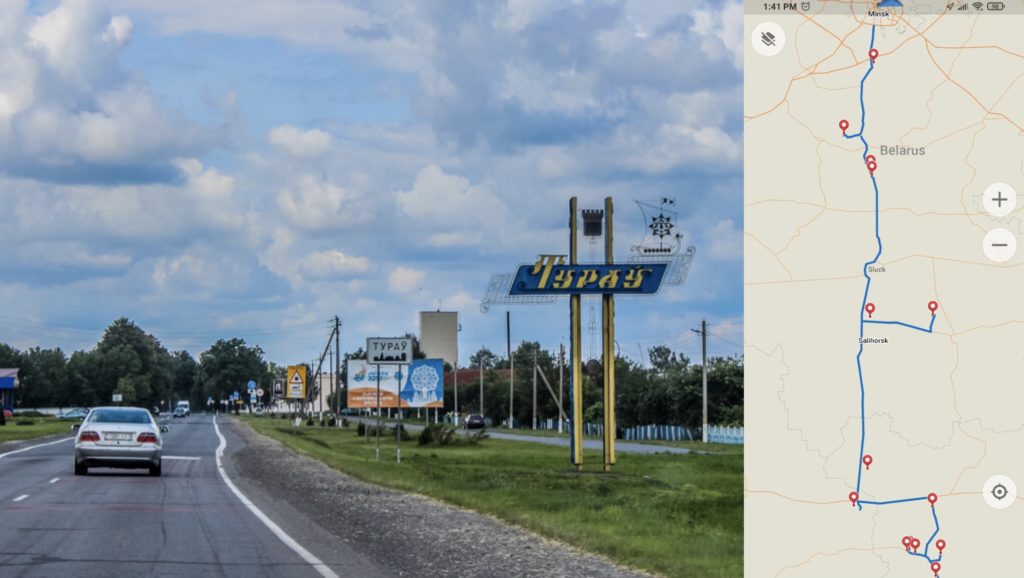